Back to Main Page


Following is an edited version of the "Findings of Fact" from the lawsuit filed by Stan Sayres against the IRS when they denied Mr. Sayres expense deductions for the Slo Mo Shun IV. It is during this investigation and testimony where clear statements are made by Mr. Sayres depicting who he considered to be the designer and who was the builder.

YOU be the judge!

Tax Court of the United States.

Held, that the activities of the corporate petitioner in constructing, maintaining, and operating racing

boats did not constitute the carrying on of a trade or business, but were incident to the personal hobby of

its sole stockholder, and the corporation is not entitled to deduct amounts expended by it as ordinary and

necessary business expenses, or to take deductions for depreciation on the boats.

Held, further, that the amounts expended by the corporation are properly taxable to the individual

petitioners, since such expenditures were solely for the personal benefit of the individual petitioner who

was the sole stockholder.

Held, further, that the individual petitioners omitted certain salary income from their returns, and that the

and building supervisor of Sayres’ Slo-Mo-Shun hydroplanes, as well as Sayres’ contracting of Jones

effectively preventing Jones from designing boats for competitors, and Sayres dismissal of

designed Slo-Mo-Shuns. And In the end, it can be seen that without Ted Jones there would have

been no Slo-Mo-Shun IV , and that once Ted left the Sayres operation in 1951, Jensen Motorboats

built no more new hydroplanes. Anchor Jensen was a builder, not a designer, and without Jones’

designs, Jensen Motorboats was out of the raceboat business except as a repair facility

In the design, construction, operation, and maintenance of Slo-Mo-Shun III, the petitioner (Sayres)

retained technical assistance of experts who were recognized as outstanding in their fields. Since Ted

Jones, the boat designer, was employed on a full-time basis as an engineer with an airplane company,

his work for the petitioner was done at nights, on weekends, and on holidays. Anchor

Jensen, of the local boat-building firm, Jensen Motor Boat Company, was the builder.

The petitioner, Jones, and Jensen watched the 1948, Gold Cup races in in August 1948, and after

room for improvement in the designing of racing boats. At that time they also recognized the possibility

of profit to be made in the designing, construction, and sale of racing boats. They considered the possibility

hydroplane boats. He used the identical design which he had used for years in building and racing

limited class boats. By August 1949, Jones and the petitioner concluded that Slo-Mo-Shun IV,

which was then in the process of construction, would prove to be far superior to boats currently

Here, Sayres testimony points to a conclusion reached following a scouting trip to the Gold Cup race in

1948 that Ted Jones’ design (as presented in Slo-Mo-Shun III) had great potential, both in racing and

possible commercial application. And that Jones designed the revolutionary Slo-Mo-Shun IV by adding

improvments to his established designs.

in a model to be built, the petitioner sought a contractual arrangement which would include Ted

Jones, the designer, and Anchor Jensen, the builder. However, because of disagreement as to

On July 17, 1950, an agreement was executed 'by and between AMERICAN PROPERTIES, INC.,

(and/or S. S. Sayres) party of the First Part, and TED O. JONES, Party of the Second Part,' which

development, construction, and testing the parties agreed as follows:

the contract and a period of 1 year thereafter; second party (Jones) agreed not to disclose to

others any basic or essential features of design, construction, or development; first party (Sayres)

agreed that when constructing racing boats, only second party (Jones) would be employed to

design such boats and to supervise construction, and that upon all boats sold by first party (Sayres), in

whom title should always rest, second party (Jones) would receive a fee of $5,000 or 10 per cent of sale

price, whichever was greater, this being in addition to time and material charges such as had been paid in

the past; first party (Sayres) agreed that if Slo-Mo-Shun IV should be sold for an amount greater than

cost, first party (Sayres) would pay second party (Jones) 10 per cent of actual netprofit after taxes, or a

flat sum of $5,000 whichever was greater, in which case second party (Jones) would, in consideration

agreed that in event of any sale of plans and designs of Gold Cup and unlimited boats, first party

(Sayres) would pay second party (Jones) a fee of $2,500 together with traveling expenses and a fee of

$25 per day actually spent in supervising construction. It was provided that the agreement should

continue until terminated by written notice of either party, giving 180 days' notice. It was signed

by S. S. Sayres as president of American Properties, Inc., and in his individual capacity, and by

Here, the court notes Sayres contracted Jones to be designer of his boats and superintendent of their

construction, and it outlines the agreement both signed. Note that the contract did not include or extend

to Anchor Jensen, and was, at Jones insistence, split from agreements dealing with boat construction.

was approached by others seeking boats of the design of Slo-Mo-Shun IV. Horace Dodge sought to

have two boats built, offering $50,000 per boat. Jones sought approval of the petitioner which was

having two boats of the Slo-Mo-Shun design built, how Jones reported Dodge’s offer to Sayres, and how

Sayres refused the offer. Note that only Jones and Sayres were involved, not Jensen.

Gold Cup races. The petitioner prevailed upon Jones and Jensen to work together in the construction of

the boat. The boat was constructed at the premises of the Jensen Motor Boat Company under the

supervision of Jones and with the aid of some of Jensen's boat builders. The boat was completed

by the end of July 1951. Jones received $5,000 for designing Slo-Mo-Shun V in addition to compensation

received on an hourly basis for its construction.

Again, the court notes Sayres testimony that Ted Jones was designer, and was paid per the contract.

About November 1, 1951, Ted Jones left and went east to work as a boat designer for

another concern. He thus ceased to operate under the agreement of 1950. No formal notice of

termination of the contract was ever given by either party. Because he felt restrained by the contract

of 1950, Jones did not, for a number of years, build any boats for others of the design of the

Slo-Mo-Shun boats, although he had many opportunities to do so. However, commencing in

January 1954, he did design a number of boats for various individuals throughout the country,

employing the design of the Slo-Mo-Shun boats. At the time of the hearing in this case in 1956,

there were about 20 boats eligible for competition in the unlimited class, of which all but 4 were of

The Court notes Ted Jones departure from the Sayres team in 1951 to work for Mercury Marine, and

Jones’ adherance to the non-disclosure portion of the contract because he felt it an obligation. It also

Maverick) and Miss Thriftway, some 16 Slo-Mo-Shun copy-variants had been constructed by others.

Ted Jones charged for boats such as Shanty I and Miss Wahoo, it can be seen that by adhering to felt

amount of money at that time. Meanwhile, Jensen, who’s family claims was the Slo-Mo-Shun designer,

and who likely would have relished such income, offered no such designs or any new boat construction

following the building of Ted Jones’ Slo-Mo-Shun V despite an open opportunity to do so.

Slo-Mo-Shun boats in their spare time since they were full-time employees of other organizations. None

of them was employed by either American Properties, Inc., or American Automobile Company. Jones

was compensated for designing the boats and Jensen was paid for his work in building them.

Once again, the court notes Sayres testimony regarding who was designer and who was builder.

the Gold Cup in July of that year, the corporation, which had no boat-building facilities and had no

continuing contract with Jensen for building, did not proceed to provide boat-building facilities or take

the ordinary steps which might be expected of a business organization looking toward making a profit,

such as advertising or making other selling attempts. On the contrary, when Slo-Mo-Shun IV won the

Gold Cup race, Jones, the designer and driver, was approached by others seeking boats of this design

and one person offered large prices for two boats, but when Jones relayed these offers to the petitioner

the latter told him (T)HAT we wouldn’t be building for anyone.

The tax court, through testimony of Sayres, notes Jensen as builder and Jones the designer. And once

design, and had Ted Jones under contract to design and supervise construction of such boats, he declined

a bonafide customer offer to pay $100,000 for two boats. When Jones understood that Sayres wouldn’t

be building more boats, and left for Mercury, the door was open with some 16 opportunities for Anchor

claims Anchor had invented, and built for Sayres, yet Jensen never took that opportunity to design or

build a single one.

About November 1, 1951, Jones left and went to work for a boat designer (Merecury Marine) in

the east. In January 1954, he commenced building boats of the Slo-Mo-Shun design for various

individuals. The petitioner (Sayres) testified that Jones’s departure was the reason that the

basis. No reason is given for his departure and we think it is indicative that he was convinced that there

would be no commercialization of the boats.

This is the clincher. Sayres has told the court that the reason he did not go into the race boat building

business was that Ted Jones had stepped out of the picture. Without Ted Jones, Sayres had no boat

designer. He did have the Jensen Motorboat Company and Anchor Jensen as a builder, but it’s clear from

Sayres’ testimony that he placed his faith in Ted Jones design talents, and not in Anchor Jensen. 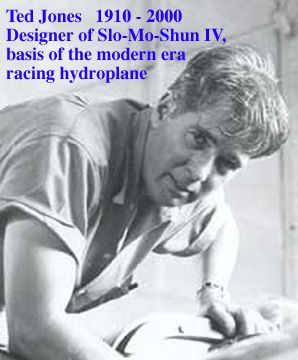